Roe deer hunting in Bulgaria cannot be described with a thousand words. Any hunter should experience that emotional and full of emotions hunt in Bulgaria.
After the two hunters had booked the dates I called Hunting Area Pereliytsa manager and we arranged the hunt 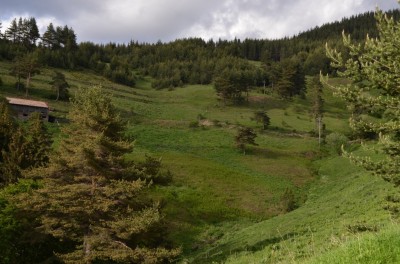 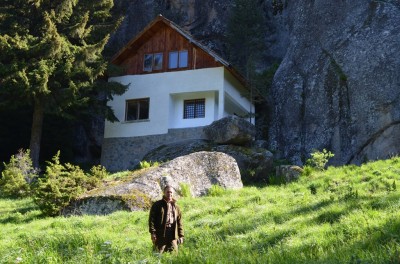 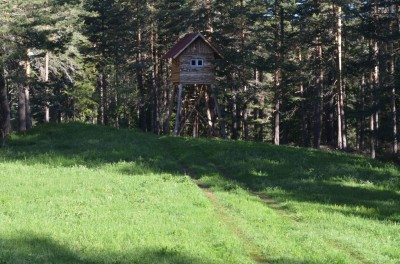 We arrived on Friday and without a doubt headed into the mountains for our long waited roe deer hunting in Bulgaria. The weather was sunny and warm and the meadows were green and breathtaking. 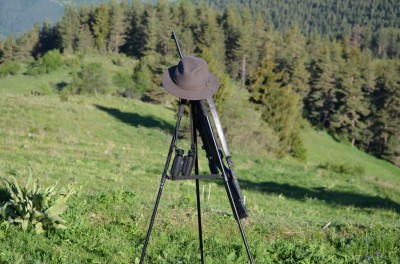 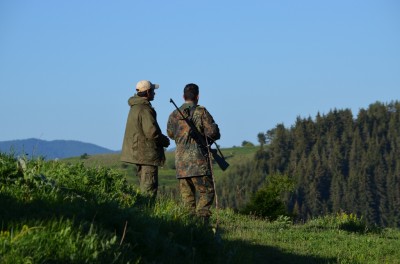 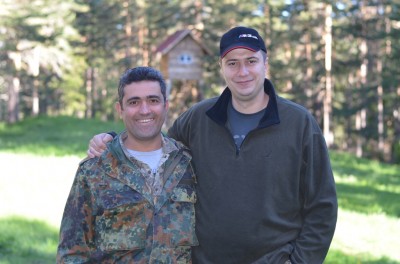 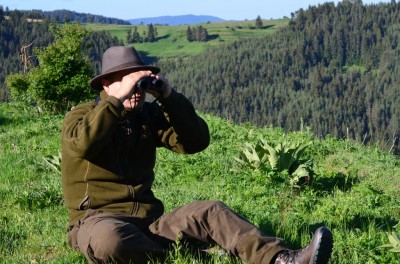 This was George’s first roe buck hunt in Bulgaria and he was very eagor to start his stalking. His business schedule was overfilled and these three days in the mountains were long dreamt. Joud Abo, the other hunter, was from Syria and we had been hunting with him long time ago.

Joud managed to shoot two roe bucks for one hour in his first outing Friday afternoon. This is what he shared with us:

“With my hunting guide Rosen settled on a very nice lawn, waited deer, but up to 20:20h nothing happened to us and we headed to another meadow behind us. After about 300 meters walking I noticed a roe deer drinking water, looked at it and went on down the slope. Suddenly, about 200 meters from the forest appeared another roebuck, who barked and left away. We went into the woods and so the stalking began . I left behind my backpack, binoculars, and tripod, because I had to duck and decided to shoot leaning on my knee. The distance was about 170-180 meters and Rosen said: “If you can, shoot!”, But the grass prevented me and I decided to crawl a few yards ahead. At this point, I raised the gun and I saw below us there was very nice deer about 50 meters, with a nice trophy. Hunting guide nodded and I fired. The roe deer fell down. The other roe buck run and disappeared from sight. We went to the fallen roe deer, look around him and decided to try to stalk and the second one. We walked down the hill and after about 300 meters we saw him. We approached the buck at about 70 meters and I lifted up the rifle to look at it. Rosen said it was tall trophy. I smoothly robbed the rifle’s trigger and sent the Hornady V-Max bullet at the base of his neck. The roe buck fell into place. Entry wound was as 50 cents and there was an exit hole.

So within 30 minutes stalking I got two beautiful trophy roe bucks. ” 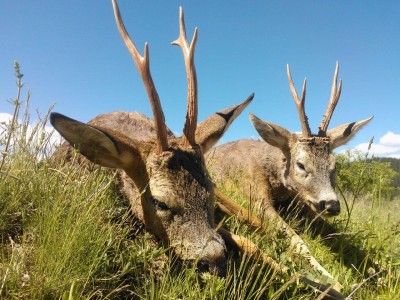 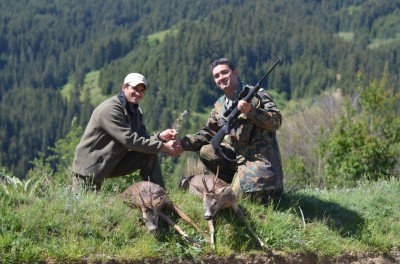 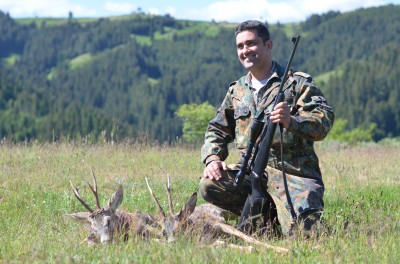 George was not that lucke. He saw just a young buck. We headed down to the hotel. It was about time Joud to buy us some drinks for his great first day luck.
We headed to the mountain at 5:00 loaded again with lots of expectations and good mood.

After this outing George was able to kill a fox. He saw also several young roe deers. We went to the hotel for a little rest and 17:30 we were in the mountain again. This time George was able to shoot a good buck from around 90 meters away. I was happy for him bevause as I said this was his first roe deer hunting in Bulgaria. It looked like today was his turn in buying the drinks. 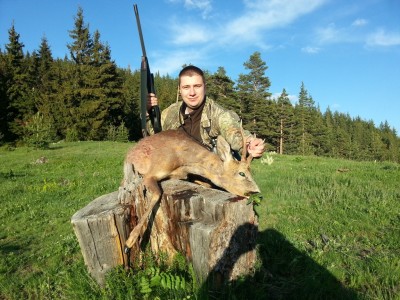 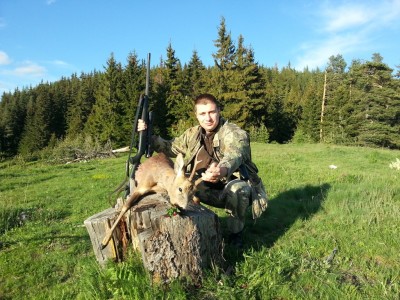 Joud’s weapon was Tikka T3 rifle in .223Rem. His riflesope was Meopta 7×50. Hornady V-Max was his cartridge choice. George was with Blaser R93 in .243 with Swarovski riflescope 1,7-10×42. Both hunters were equipped with binoculars and tripods. 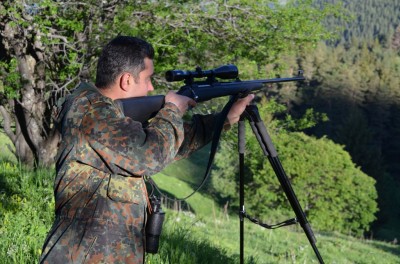 We tried our luck on Sunday but the weather changed suddendly, very windy, and the roe deers preferred to stay in the forest where was less windy.

Here is the place to thank the manager and the hunting guides of Hunting Area Pereliytsa for their professional attitude and friendly manners. I strongly recommend this area because of wildlife abundance. We checked the trail cameras and there were lots of picture of bears, wild boars, roe deers. 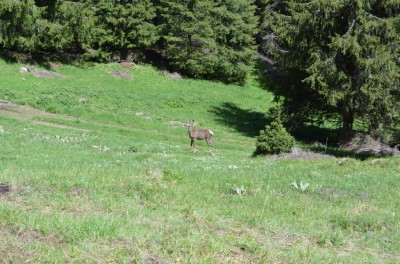 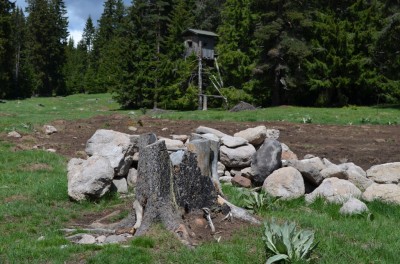 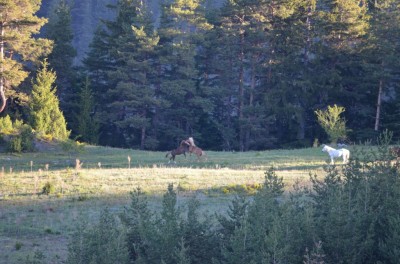 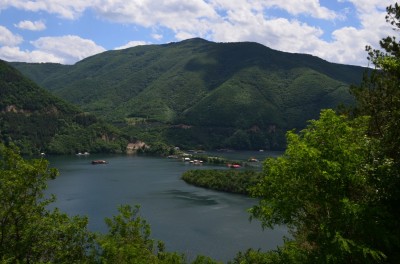 We left full of emotions and smiles did not drop out of our faces.

Here are several pictures of the trophies. 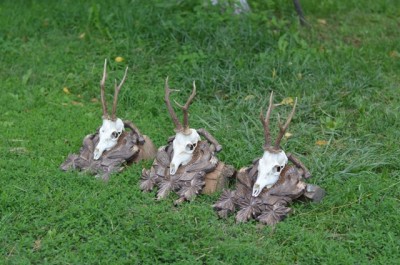 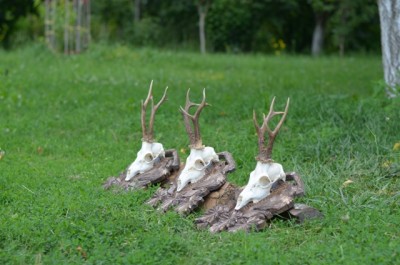 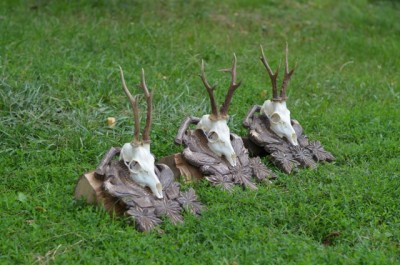 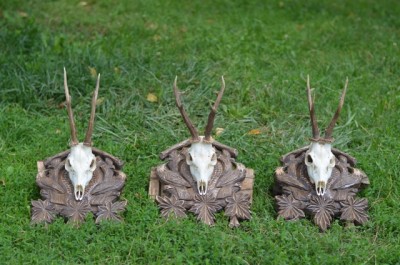 We, at Ultimate Hunting, would like to thank the hunters for their good discipline and for the positive attitute during their entire stay! If you want to experience this magnificent roe deer hunting in Bulgaria, do not hesitate to book a hunt with us! Come as ou guest, leave as our friend!