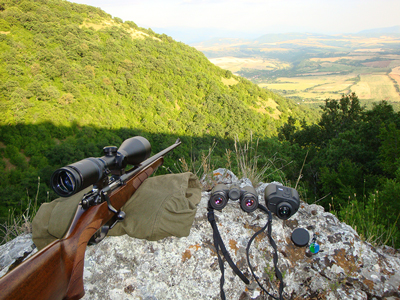 Hunting in Europe used to have symbolic meaning in the European society because it was tightly connected to monarchies type of living.

In the biggest part, hunting was a privilege only to noblemen. It started that way because the nobles were the owners of the land where the hunting was taking place. Even not all of the aristocracy people were allowed to hunt.

Peasants were encouraged to participate only in varmint hunting since varmints were considered to be damaging noble animals like red deer, roe deer, hare. Wolf and fox were the main game animals in varmint hunting in Europe. Wolves were even viewed as a threat not only for the animals but for humans too. This explains why in eighteen century it was almost extinguished specie.

1.2 Hunting as a food source

Noblemen started eating venison more in a symbolic meaning since they had almost every meal they wanted during Royal fiests. Venison was the meat that differed noble people from the peasants.

Hunting was royal and noble activity since ancient times. It was thought to be important test for man’s skills in using arms. Driven hunts were born and it became the most exciting way of hunting game animals till nowadays.

Europe is home to the best hunting equipment manufacturers in the world – shotguns, rifles, rifle scopes  binoculars, ammunition, clothing, and shoes. European hunter’s needs are the driving force of improvement of every aspect of hunting industry. England, Italy, Belgium are known for the finest shotguns produced in the world. Brands like Holland and Holland, Benelli, Beretta, Browning speak for themselves. Germany produces precise rifles in the high end class – Blaser, Sauer, Mauser, Merkel, Krieghoff, Heym.

Optic instruments like riflescopes, binoculars, rangefinders of the highest quality are also German – Zeiss, Schmidt and Bender, Leica, Docter, Steiner. Austria is proud with Swarovski and Kahles and the Ferlach region which is synonym for top quality rifles and combination guns. Nordic countries are leaders on the market producing the best hunting clothing – Harkilla, Chevalier, Seeland, etc.

Tikka and Sako are known for their Finnish precision, durability, and reliability.

European continent is home to many and various game animals:

Two of the most spectacular ways of hunting in Europe are wild boar driven hunts and deer stalking. Traditional hunt for the Alps region is chamois /gams/ stalking offering breathtaking mountain views.

Hunters all around the world are dreaming about visiting the Old Continent, having the chance of hunting European game animals and experiencing the local traditions coming with it.