The decision for hunting in Bulgaria deserves admiration not only because of the great trophies that could be bagged in Bulgaria but for the unforgettable adventure that is about to make your hunting dreams come true. Touching to Bulgarian hospitality, local traditions, Bulgarian cuisine with recipes handed down from one generation to the other will bring you back again and again. Thus, 70% of hunters have visited our country plan their next hunting trip to Bulgaria right before leaving back to their home.

Essential info about hunting in Bulgaria

Wild boar driven hunting is among the most desired and preferred hunts in Bulgaria. Outfoxing that clever and intelligent animal gives the hunter unparalleled satisfaction. A well placed shot is needed not only for clean boar kill but for safety reasons as well. Wounded wild boar is usually more aggressive and willing to attack hunter that even brown bear is. For the sake of respect, we recommend using calibers from .308win and bigger combined with the heaviest bullet for the caliber, capable of deep penetration. Male tuskers develop up to 2 cm thick breast plate during the winter ant this explains why the bigger the caliber is, the better.

The drive is usually done by 2-4 beaters and up to 15-18 shooters. The drives in Bulgaria are relatively short and last not more that 1-1.5 hours covering not very big area. The hunting terrains for the most part are highly mountainous.

Shooting a fast moving object like the wild boar is a big challenge even for quite experienced shooter. Most of the Bulgarian hunters who are using rifles prefer them in .308 win, .30-06sprg, .300winmag, 9,3×62. We recommend red dot sights equipped with the rifles or riflescope with minimum magnification starting from 1, 1.1, 1.5 for quick target acquisition /1-4, 1-6, 1,5-6, etc./. Recently, there are more hunters preferring shotguns with a slug cartridge. The shotgun closes down the effective shooting distance and increases the adrenaline rush when meeting the wild boars.

There is no such pleasure as seeing a big, hairy tusker digging out the snow, running towards you. You’d better be prepared for that once-in-a-lifetime meeting!

As far as red deer hunting is concerned, everybody knows that the last four World Records trophies are taken in Bulgaria. Often referred as the Monarch of European forests, Red deer is no doubt the most magnificent animal on our continent. The season starts at September 1st and ends on January 31st. Red deer is strong and tough animal and we also recommend calibers starting from .308win, .30-06sprg and bigger for securing the trophy. Grown males with more than 14 kilos trophies are not unusual. Very appropriate period for stalking red deer stags is during the rut.

The unforgettable view of fighting bulls careless about the rest of the world is one of a kind. 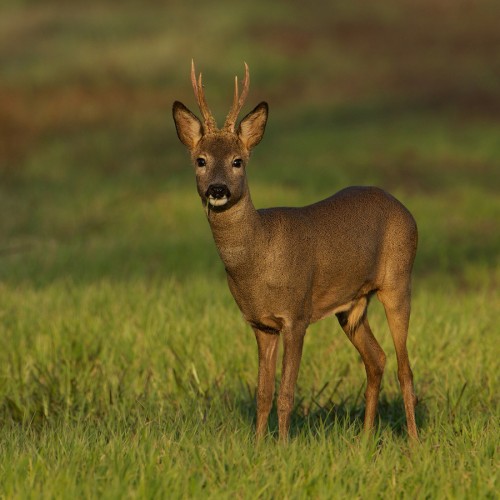 Roe deer hunting in Bulgaria is fundamental for our country. Roe deers are equally distributed everywhere. Normally, the trophies in the mountains are longer in length but lighter in weight. The heaviest trophies are around Danube river plains in the North-Eastern part of Bulgaria where also the red deer trophies are the biggest in the world.

Hunting roe deers is associated with the most beautiful season – the spring. Hunting season starts at May 1st and ends October 31st.

Stalking roe deers in the morning during May will enrich you with spectacular mountain and plains views and with the smell of the spring – flowers and herbs.

We recommend calibers starting from .223rem and bigger but with appropriate bullet for not damaging the meat too much. Roe deer meat is considered among the best tasting venison. Roe deer hunting will give you an intimate touch to the nature and beautiful landscape snapshots will be kept in your mind for a long, long time. At least till your next hunting trip to Bulgaria.

Brown bear hunting in Bulgaria is done under strict regulation since 1.1.2013. Hunting areas obtain bear permits only for problematic, troublesome bears. A bear hunting permit can be issued only if it proved that the animal is aggressive towards humans and/or livestock. This increase the brown bear hunt popularity in Bulgaria and many hunters are willing to face that challenge. The satisfaction often comes not only from the successful battle between hunter and bear but because of the thankful village people who appreciate hunter’s efforts to eliminate the dangerous animal and saves their livestock from future bear attacks. Thus, the brown bear hunt in Bulgaria should be booked at least 6-12 months in advance.

The hunting periods are March 1st-April 30th and October 1st-December 31st. usually it takes more than 3 months for the permit to be issued if there is a troublesome bear in the area.

You can go bear hunting in several European countries but only in Bulgaria you will try your hunting skills against truly wild and aggressive beast. Calibers that we recommend are starting from .30-06sprg and bigger with the heaviest available bullet with controlled deformation. Hunting is done during the night, so warm and comfortable clothes and shoes are necessary. Your riflescope should be with at least 50 mm front lens for maximum light transition. Illuminated reticle is a must. Bear hunt is serious occupation and we will help your prepare well for it!

Bulgaria is among the few European countries with stable wolf population. Hunting wolves is allowed throughout year and is encouraged by local authorities. It is widely discussed topic and we are defending the position that wolf should be hunted on a country basis and common European policy is not fair and equally objective, because in recent years wolf population is growing and in many parts of Bulgaria there are constant damages for the farmers like the case in 2012, when 3 wolves killed 54 sheep during one-night attack.

Hunting predators is great passion for many hunters because wolves have keen senses and are significantly more cautious and alert than herbivorous deers, wild boars, etc.

Outfoxing a predator gives a hunter incomparable pleasure because this is considered to be the essence of the eternal game – hunting.

The most effective way is waiting on bait during the night. The chances are significantly higher during the winter because of the scarce food source but it is not unusual for the wolf to visit the bait anytime of the year. Sitting all night in a high seat infers comfortable and warm clothes and shoes. Normally, most of the baits are 75-85 meters from the high seat – a good compromise on descent distance for the wolf not smelling you and you being able to take secure shot during lowlight conditions. We recommend .243win and bigger calibers and riflescopes with min 50 mm diameter front lens. Hunting wolves needs at least 5 nights waiting for having chances of meeting that mystique animal. Usually one in every three hunters sees wolf, so this is not trophy for everybody. Only truly decisive and persistent hunters are getting that elusive predator.

For any other game hunting /fallow deer, chamois, mouflon, pheasant, duck, goose, jackal/ send us an inquiry and we will get back to you with detailed description on how the hunting is done in Bulgaria, specific

Do not hesitate to contact us with any questions you may have!