About 8 months ago I received an e-mail inquiry from American hunter Daniel Froyse about mouflon hunting in Bulgaria . He wanted to shoot representative trophy for his collection. I recommend to him the best place for that hunt in terms of wildlife variety, good accommodation and mouflon trophy population. He accepted it and we only had to clear the details – dates, flights, etc.
American hunters are known for their passion for hunting rams. Every hunter knows that one of the most valued hunts in North America are Dahl Sheep, Rocky Mountain Sheep and Big Horn Sheep. Daniel had a trophy from each of them and now his dream was to acquire mouflon medalist from Europe. That was the last continent he has not hunted yet in.
We marked May 11th to 14th as best dates for the mouflon hunt in Bulgaria. Daniel arrived and I met him at Sofia Airport. I always personally pick up my guest hunters from the airport and accompany them during their entire stay. All of them appreciate this personal attitude and they come as guests and leave as friends Bulgaria.
Daniel was high spirited and eager to experience mouflon hunting in Bulgaria at its best. I always feel calm when hunters who accompany are positive. The time to the area passed quickly while we were sharing old hunting adventures stories.

The weather was great and spring in Bulgaria was at its peak. Finally, we arrived at the hunting lodge, got our rooms, and Daniel decided to check the rifle. The rifle was Remington SPS Varmint .243win, equipped with optics Vortex Viper PST 4-16×50 FFP riflescope. The cartridge we selected for this hunt was Barnes TSX, 85 grains. Mouflons in Bulgaria are strong animals and that was the reason to choose stout bullet with good penetration. Barnes bullets are among the best on the market with always similar performance, quick expansion, maximum penetration and I would say also a meat-saver. After five shots fit in 1 MOA we decided to move on to dinner.

When you go for hunting in Bulgaria it is normal to expect that at hunting lodges you will try mainly venison dishes cooked in a local manner. We started with pheasant soup, grilled quails, and fallow deer stew with vegetables. Nutritious food was mandatory for good mood and energy that we needed for the hunt.
In the morning we had a quick snack at 5:00. Daniel was really passionate coffee drinker and really enjoyed the refreshment drink all the time.

At 5:30 we were at the rocks where we were to hunt his dream mouflon. Mouflons have adapted very well on the territory of Bulgaria – mild climate and rocky terrains contribute especially for their suitable habitat. Predator presence is a big problem for the mouflons. These magnificent animals originate from Southern Corsica, Italy where there are almost no predators.
The morning passed mainly waiting at highseat. Around 8:30 the hunting guide and the hunter decided to try their luck stalking. There were many females and young rams, but Daniel’s trophy ram was not there yet.

We went back to the lodge, had a very nice lunch and decided to vist the closest city of Varna. Daniel proved to be an avid photographer and really wanted to take some good photographs of the cathedral at the city center. In the afternoon we had several big mugs of coffee and headed back to hunting. The situation was similar to the morning. There were some females and two males with trophies around 70-72 cm. Daniel wanted to hunt gold medal mouflon and we were after ram with 80+cm trophy length. Hunting guide and Daniel decided to check a close wheat field where mouflons liked to feed. That was the right strategy because there was a big herd of mouflons there. There were 5 nice males standing close to the forest on the right side of the wheat field. First male of the group was over 10 years old and he head scars on his horns showing he was old warrior. The length was also matching his age – over 80cm. The rangefinder reported 142 meters. Daniel was holding comfortably the rifle on the bipod and waiting for the ram to stand sideways for ethical and secure shot. That was a long waiting – it took 6 minutes for the ram to turn and stop for a second. Daniel was raised in Zimbabwe and was hunting 25 years all African animals. The experience and routine he had left no doubt that the shot will be easy. 85 grains Barnes bullet left the barrel with 900 m / sec and penetrated the animal into the lungs. Mouflon was dead on the spot. 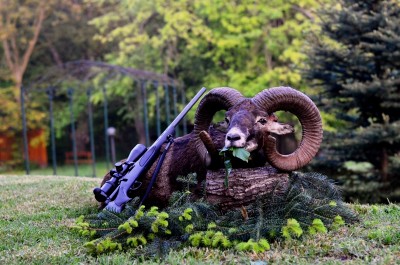 CIC assessment later confirmed our assumptions – gold medal with 206 CIC points. The horns were long averaging of 82.5 cm, which proved the good genetics and proper management of mouflon in Bulgaria. We saw the scars on the horns at close. It was really old and leading male of the herd. Daniel was very excited and told me that his fellow hunters who are also keen on hunting rams would be very impressed with the great trophy, taken in Bulgaria. 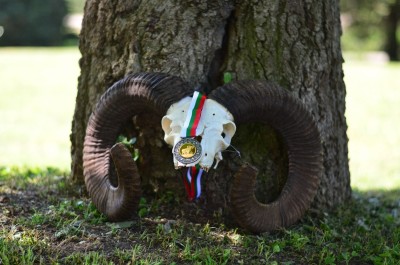 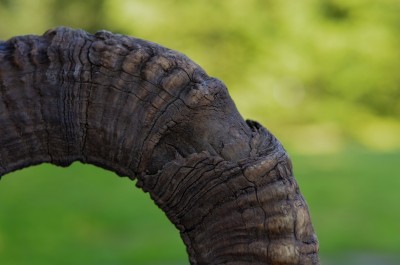 We spent the remaining few days sightseeing. We visited Old Dobrich, cape Kaliakra, city of Constanta, Romania, Kotel, Zheravna, Nessebar, the Rila Monastery. Daniel bought a great carpet, made in the old traditional method in the town of Chiprovci. 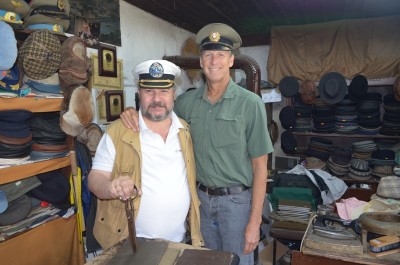 Next day was Daniel’s last one in Bulgaria. I gave him a ride to Sofia Airport where he was flying to Washington with Frankfurt connection flight.
I am always very happy after successful hunt in Bulgaria with foreign hunter. This is how we show to the world that our country is very nice hunting destination. This hunt was not an exception! All hunters are welcome to try their luck with us hunting not only mouflons but also red deer, fallow deer, wild boar, roe deer, chamois, wolf, birds!